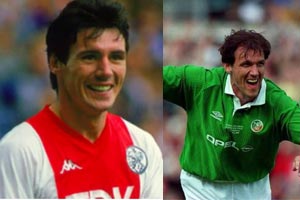 The directors of TLICN would like to present the very special “Legends in the City” event with Frank Stapleton and Tony Cascarino on Thurs 26th Sept from 6.15pm.This is our annual joint TLICN / IIBN event which will be held at Balls Brothers, Mincing Lane, EC3R 7PP and is kindly hosted and sponsored by Eclipse Sports Promotions, the Sporting Legends company. 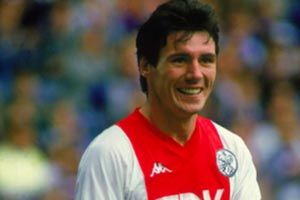 Born in Dublin, Frank Stapleton is best remembered for his time at Arsenal, Manchester United, Ajax and as a pivotal player for the Republic of Ireland. He has also been manager at Bradford City and MLS club New England Revolution.
Frank now works as a football pundit and as a guest speaker at Old Trafford. 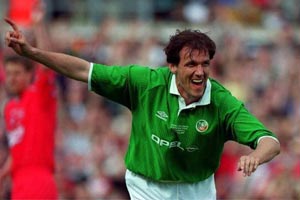 Tony Cascarino was an integral part of Jack Charlton’s Republic of Ireland squad, he played for a number of clubs during his career including Aston Villa, Chelsea and Marseille.
Since retirement, Tony has presented on TalkSPORT radio and has written for both The Times and Ireland’s Hot Press magazine. He has worked for both Sky Sports in England and TV3 and Today FM in Ireland.

Places for this event are limited and will be allocated to TLICN members in the first instance.

If you would like to attend the Legends in the City event, please email us.